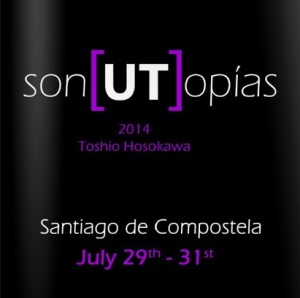 campUSCulturae is a bet from the University of Santiago de Compostela in favour of the cultures of the world, multicultural understanding and promotion of the diversity and pluralism. Inside this wide project it is placed the International Centre of the Creativity, which developed a space of experimentation with relationships that are established between literature, music, performing arts and new technologies. In this context, campUSCulturae presents the second edition of son[UT]opías, international meeting of musical creation that this year has the pleasure of inviting to Santiago de Compostela to the Japanese composer Toshio Hosokawa.

son[UT]opías 2014 will take place between 29 and 31 July, three days in which will be a broad musical portrait of the Japanese composer. Solo pieces, Chamber music and orchestral repertoire, music that explores the relationship between Western avant-garde art and Japanese traditional culture. The musical program culminates with the world premiere of a new piece that Hosokawa writes for this project: Drei Engel-Lieder for soprano and harp. For all this, it has sound Vertixe Ensemble as a resident ensemble, as well as with the participation of the Real Filharmonía de Galicia and the presence of two eminent Japanese interpreters: Yuko Kakuta soprano and harpist Naoko Yoshino. The musical composition, transculturation in contemporary music and aspects of new technologies applied to the creation of art of forefront, are issues to be addressed and enjoy the conferences, lectures and concerts of composers, including several world premieres.

On the other hand, the presence of the Japanese artist is an opportunity for new creators who son[UT]opías does not leave unattended, hence the need to organize a specific work session for composers. In addition to the planned Master Class, son[UT]opías opened a call for scores of all ages and nationalities, and registration is free. Besides son[UT]opías opened a call for scores (arrived more than 40 originals from all over the world) from which Hosokawa and the resident ensemble have made a rigorous selection of two works on which creates an extraordinary session of reading and that they will be interpreted in the season 2014/15 of the Galician ensemble.

LISTENERS (no attendance limit, access to all of the activities except for the Masterclass)

The international meeting for music creation, son[UT]opías 2014, is opened to the public in general, it’s not necessary to be a professional musician, a composer or a teacher for participating. On the other hand, and for the first time, this international meeting of music creation, son[UT]opias 2014 is acknowledged as continuous training for teachers by the Galician Government (Consellería de Cultura, Educación e Ordenación Universitaria), comprising 24 hours divided in the following activities:

Composers participates in a group lesson of 120 minutes with T. Hosokawa. Among all of applications received, the works by Misaki Goto (Japan) and Daniela Terranova (ITaly) have been selected.

Two scores were selected from among the works presented. Vertixe Sonora Ensemble will make an open reading session with Hosokawa and the composers. Duration will be 75 minutes for each piece.

In addition, both pieces will be performed in concerts during the 2014/15 season of the Galician Ensemble

Three composers were selected from more than 40 applications received. The duration of the presentation should not be longer than 45 minutes per participant.
The selected composers are:

Introduction to the son[UT]opía of Toshio Hosokawa
David Durán

Music in the limits of control: feedback systems
Ángel Faraldo

This project has been funded with support from the European Commission.
This publication reflects the views only of the author, and the Commission cannot be held responsible for any use which may be made of the information contained therein.